Simone Biles, the superstar Olympic gymnast, has emerged from a hacking scandal as a new kind of champion; a champion for those with ADHD.

A group of Russian hackers publicly posted health information about U.S. athletes, including Simone Bile’s record of a positive test for the banned substance methylphenidate, known more commonly as Ritalin. Biles filed all the appropriate paperwork and was approved for a therapeutic-use exemption for the drug for her ADHD, so she didn’t actually break any drug-testing regulations. While publishing confidential medical information is a huge violation of privacy, Biles responded to the attack that was meant to weaken and invalidate her full of strength and free of shame.

In a tweet Biles said, “Having ADHD, and taking medicine for it is nothing to be ashamed of”. 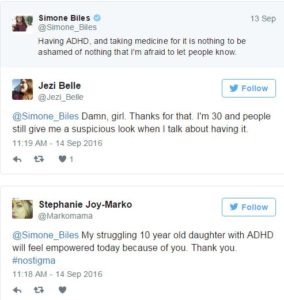 In the midst of this scandal, Biles has become a role model for ADHD kids. She proudly declared her ADHD diagnosis, showing kids that ADHD is nothing to hide and doesn’t have to limit their dreams. Her success completely disproves the common misconceptions that people with ADHD are lazy and incompetent.

While common symptoms of ADHD include difficulty focusing, following instructions, and planning ahead, Biles has showed that with proper management and treatment, these ADHD symptoms can be cleared off of the road to success. Preparing for the Olympics requires incredible physical, even more so, mental strength. Biles demonstrated laser focus, an ability to follow her coach’s directions, and a dedication to preparing for the future in her long quest to Olympic gold. The fact that Simone Biles worked her way to the tippity top of the gymnastics world with an ADHD diagnosis shows that there’s no limit to what people with ADHD can achieve!

Do you or a loved one live with ADHD? Contact Segal Institute at 1-877-SEGAL-88 to see if you may qualify for a clinical research study OR click here to request a pre-screen!