Life is full of puzzles and grey areas. But there is at least one thing we can all be certain about in this ever-changing world: kittens are adorable.

Now the bad news: two recent studies have found that a certain parasite found in cats could contribute to schizophrenia and other mental illnesses in humans.

The parasite is Toxoplasma gondii, and it is the most common parasite in developed nations. Cats carry this T. gondii, but it can infect any warm-blooded animal (that includes us). In people with weak immune systems, T. gondii can cause a variety of medical problems, including mental disorders.

Now, a recent study from Johns Hopkins University has deepened the link between cat ownership and mental illness. The researchers reviewed two previous examinations on the topic and found a correlation between frequent exposure to cats in childhood and psychiatric disorders as an adult.

“Cat ownership in childhood has now been reported in three studies to be significantly more common in families in which the child is later diagnosed with schizophrenia or another serious mental illness,” the authors wrote.

In a second study coming out of the Netherlands, researchers performed a meta-analysis of 50 studies and confirmed the association between cat ownership and mental illness. They focused on the influence of T. gondii infection, which they found doubled a person’s risk of developing schizophrenia.

“In schizophrenia, the evidence of an association with T. gondii is overwhelming,” the authors wrote. “These findings may give further clues about how T. gondii infection can possibly [alter] the risk of specific psychiatric disorders.”

Now, as a reward for reading all that bad news, here’s another kitty: 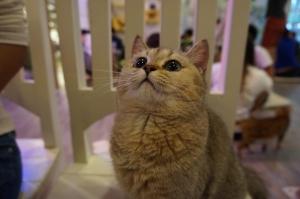 Do you or someone you know have schizophrenia? See if you qualify for Segal Institute’s clinical research study on schizophrenia today!