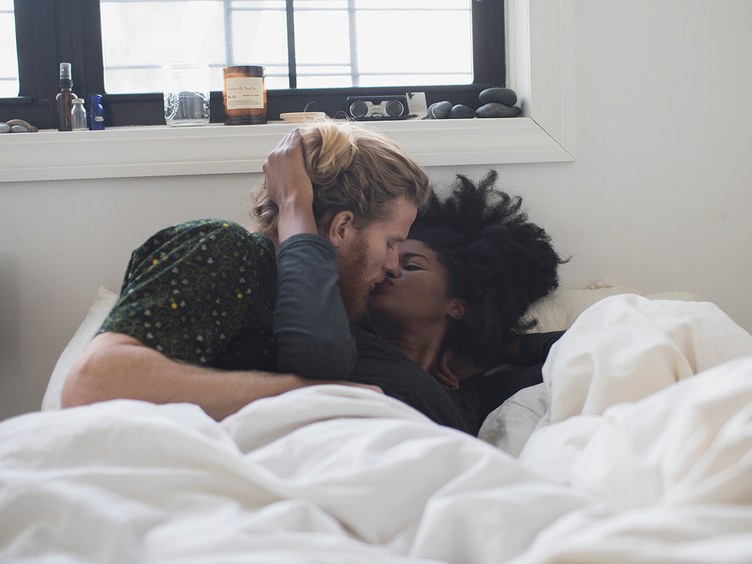 If you drew a Venn diagram to compare the kinds of birth control that prevent pregnancy and the ones that protect against sexually transmitted infections, the overlapping portion in the middle representing those that do both would be pretty small. While all forms of contraception are designed to impede pregnancy in some way, only a select few attempt to ward off STIs, too. If you’re looking for birth control that guards against pregnancy and STIs, your sole options are condoms—both external and internal kinds. Let’s go over what those are:

Since birth control myths abound, let’s have a quick refresher on external and internal condoms and how they work.

External condoms are thin sheaths of material meant to go over an erect penis before any penetration begins and stay there until after ejaculation has occurred. External condoms are usually made of latex but can also be made from polyurethane (plastic) or lambskin, according to the Mayo Clinic. If it’s STI protection you’re after, you should take a pass on the lambskin ones, since small infection-causing particles can penetrate them.

Internal condoms look like long, thin pouches with a flexible ring on each end (one end is closed and one is open). These are usually made of polyurethane and synthetic latex, the Mayo Clinic says, and—fun fact!—the outer ring may even help stimulate your clitoris, depending on how your body works.

If you’re using an internal condom, the ring with the closed end goes inside the vagina before sex, while the open end stays on the outside of the body, the Mayo Clinic explains. (Technically you could insert this up to eight hours before sex, though that probably depends on what you’re doing and wearing at the time…) You leave the condom in during sex, and once any sexual activity involving vaginal penetration is over, you’ll carefully pull on the outer ring to remove it.

There’s a lot condoms can do when it comes to STI protection, especially when you’re talking about STIs that pass through body fluids.

One of the biggest ways many STIs spread is through direct contact with bodily fluids. Barrier methods like condoms can be very effective at putting the kibosh on this mode of transmission, Leena Nathan, M.D., an ob/gyn at UCLA Health, tells SELF.

There are a bunch of STIs condoms can help protect you against, including HIV, gonorrhea, trichomoniasis, and chlamydia, according to the Centers for Disease Control and Prevention(CDC). Condoms can also help prevent you from contracting these and other STIs during oral sex, the CDC points out: You can use an external condom on a penis or, if you don’t have a dental dam on hand, cut up an external condom to serve as a makeshift one over a vulva, vagina, or anus. Both kinds of condom options can also be used during anal sex (though you’ll want to remove the inner ring from the internal condom before inserting that).

Condoms aren’t perfect, like anything else on the planet. (Maybe except puppies and dessert?) Using one doesn’t mean you’re guaranteed to not get an STI. In fact, the CDC specifically says on its website that the only ways to have absolute protection against STIs are to entirely avoid having sex or to be in a mutually monogamous relationship with someone who doesn’t have an STI. If that’s not your reality, that’s fine. Condoms can still offer protection. So, use them!

Just remember that you have to do so the right way to reap their full protective benefits, Taraneh Shirazian, M.D., an ob/gyn with NYU Langone Health, tells SELF. For instance, having sex for a few minutes then putting on a condom before either one of you orgasms isn’t going to offer great protection against STIs or an unintended pregnancy. Neither will using condoms that have tears, using oil-based lube that degrades latex, or making other condom mistakes. Here, the CDC explains the correct ways to use external and internal condoms.

When it comes to pregnancy prevention, internal condoms seem to have slightly higher failure rates than external condoms.

While it’s not clear why this is the case, the internal condom may be more likely to break, slip out of the vagina, get pushed into the vagina, or allow the penis to slip between the material and the vagina, according to the Mayo Clinic. Any of these happening can increase your risk of contracting an STI or having an unintended pregnancy.

If you’re considering which kind of condom to use, you’ll probably want to weigh various factors like how much the potential difference in protection matters to you vs. how much you care about having control over inspecting and inserting an internal condom in a way you might not if your partner is bringing the protection. You may also consider if you’re using another form of contraception along with this (like the pill or an IUD).

When it comes to STI protection, both types of condoms do a great job of lowering the risk of transmission. But they don’t eliminate the risk entirely, especially considering that some STIs are spread through skin-to-skin contact.

Condoms can do a lot to prevent STIs, but they’re not fully effective in stopping every single one you can get, Jonathan Schaffir, M.D., an ob/gyn at the Ohio State University Wexner Medical Center, tells SELF. Some STIs pass through skin-to-skin contact. Unless you’re somehow using a full-body condom during sex, it’ll only cover part of your skin surfaces, so you can still be vulnerable to infection.

That said, the internal condom is a little bigger and does technically cover a little more surface area of the external genitals (like the vulva) with that outer ring, so it’s possible that it offers a little more protection against skin-to-skin transmission, though that hasn’t been evaluated in clinical studies.

Here are the STIs it’s possible to get, even when using condoms perfectly:

Herpes: The herpes simplex virus can cause sores on your mouth or genitals, and the sores don’t always grow in areas that a condom would cover, the CDC explains. What’s more, it’s possible to shed the herpes virus (i.e., be able to spread it to others) in areas of the skin that don’t even have a visible herpes sore.

Human papillomavirus (HPV): HPV doesn’t always cause health issues, but in some people, it can lead to genital warts and cancers of the cervix, vagina, vulva, penis, and back of the throat, among others. Using condoms the right way every time you have sex can lower your odds of contracting this virus, but HPV can infect areas of your body that aren’t covered by a condom, the CDC says.

Hands down, the best way to prevent getting HPV is to get the vaccine that blocks transmission of the virus. It’s recommended for basically everyone who is 9 to 26 (as long as they’re not allergic to any of the ingredients), though it might still make sense for some people to get it after that, too. Here’s more information about who should get the HPV vaccine.

Molluscum contagiosum: This is a benign skin disease that causes lesions that can show up anywhere on your body. They’re usually bumps that are around ¼ inch in diameter with a small dot near the center, and they can become red, itchy, and inflamed, according to the Mayo Clinic.

Molluscum contagiosum is most often spread during sex, but it’s also possible to transmit this virus via objects like clothing and towels, the CDC says. If a sexual partner of yours has it, they should follow these steps the CDC outlines, including washing their hands properly (this is the best way to avoid spreading it), covering the lesions if there’s a chance someone else could touch them, and not having sex until the infection passes (usually within six to 12 months).

Pubic lice: Also called “crabs,” these parasitic insects typically go from one person’s genital area to another’s via sexual contact. More rarely, they can spread through objects like clothes or towels, and they can also show up in coarse hair on other parts of the body, like the legs, armpits, and eyebrows or eyelashes, the CDC explains. Wherever the lice show up, you may be able to see them crawling around (or see their eggs, known as nits) and experience some itching.

Since lice are big fans of the hair surrounding the genitals, using condoms won’t protect you, the CDC explains. That’s why the organization recommends that people with public lice avoid having sex until they’re treated.

Syphilis: This bacterial infection proceeds in stages starting with painless sores on the genitals, rectum, or mouth, then eventually transforming into a rash that may come along with issues like fever or a sore throat, according to the Mayo Clinic. When left untreated (often for years), syphilis can result in complications like damage to the brain, nerves, eyes, heart, and other important organs.

This doesn’t mean you won’t get some protection from these STIs by using condoms, but you won’t be as safeguarded as you are when it comes to infections like HIV and gonorrhea, Dr. Nathan says.

If you want to lower the odds that you’ll contract an STI, condoms aren’t flawless—but if you commit to using them perfectly every time, that’s an excellent place to start.

Even with regular condom use, it’s a good idea to get checked regularly for STIs, just in case, Dr. Schaffir says. Here are the screening recommendations you should follow, per the CDC. And when you do go in for testing, be honest about your sexual practices, even if they don’t involve condoms as much as you know they should. The great thing about safe sex is that every single time is a new chance to get it right going forward.