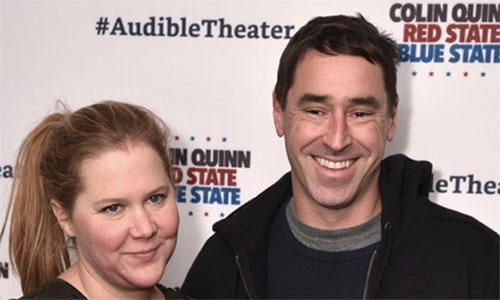 Comedian Amy Schumer gets personal in her new comedy special, sharing that her husband, Chris Fischer, has autism spectrum disorder.

“I knew from the beginning that my husband’s brain was a little different than mine,” Schumer said in “Amy Schumer Growing,” which began streaming on Netflix Tuesday. “I have to start this over because I really want to get this right because I love him very much.”

“My husband was diagnosed with what used to be called Asperger’s. He has autism spectrum disorder. He’s on the spectrum,” Schumer said, per Entertainment Tonight. “And there were some signs early on.”

ASD is usually diagnosed in young children, but adults can be diagnosed as well. Symptoms can be overlooked or be mistaken for other disorders, according to WebMD.

“Once he was diagnosed, it dawned on me how funny it was, because all of the characteristics that make it clear that he’s on the spectrum are all of the reasons that I fell madly in love with him,” Schumer told the audience, per E! News. “That’s the truth. He says whatever is on his mind. He keeps it so real. He doesn’t care about social norms or what you expect him to say or do.”

Amy Schumer said husband Chris Fischer “keeps it so real.”
According to Yahoo Entertainment in the segment above, Schumer recounted a time she fell while walking with Fischer. “He kind of froze and became a lighthouse, opening and closing his mouth. I remember lying on the ground looking up at him and I wasn’t mad. I just thought, ‘huh.’ Lotta ‘huh’ moments, you know?”

In an Instagram posted Monday, Schumer called her husband “courageous and beautiful” for being open about himself and their marriage.

Schumer and Fischer, a chef, married in February 2018. Schumer announced she was pregnant in October.